Posted on August 7, 2017 by markmorrisdp

In the life of a freelance cameraman there is no telling what the next job will entail.  You never know what you will run into, and for that reason I have found that a vital quality for success is the ability to anticipate – and imagine – what challenges you might encounter.

Two recent shoots were about as different from each other as they could possibly be.  Each required completely opposite skills and camerawork.

The answers to the usual pre-pro questions were wildly diverse:  What kind of camera(s)? Three different kinds on one shoot.  Three other models on the next shoot.  What style shooting?  Locked-down on sticks in a small hotel room for one.  Roaming seven floors of a theatre on Broadway for the next.  Wow!  There’s a lot that could happen in these environments.

Each gig took place at an iconic location – the first one on the West coast, the second one on the East coast. First up,  a day of interviews with the on-screen personalities of  the Nat Geo shows at the Beverly Hilton hotel. 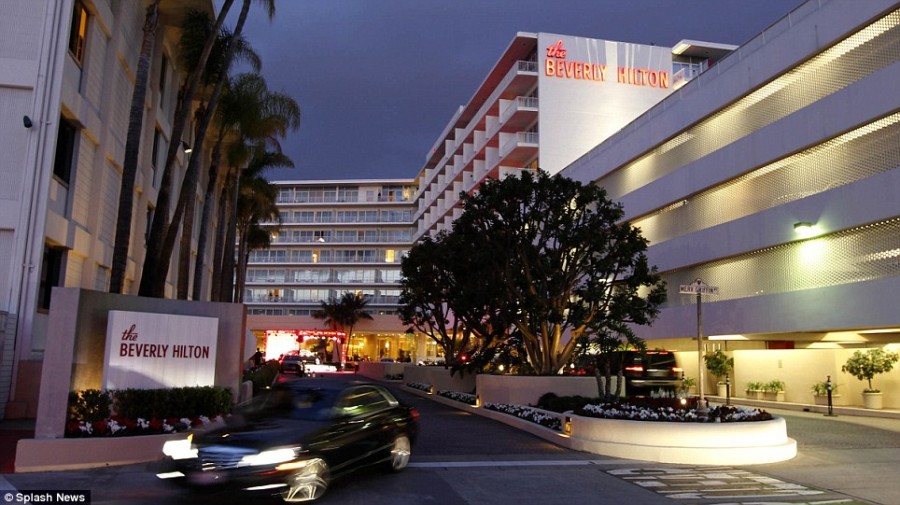 But with all the luxurious spaces at this luxury landmark we were shooting the interviews in a small hotel room.  So our setup was two Sony cameras locked side by side for a frontal angle and a Canon 5D getting a 90 degree profile 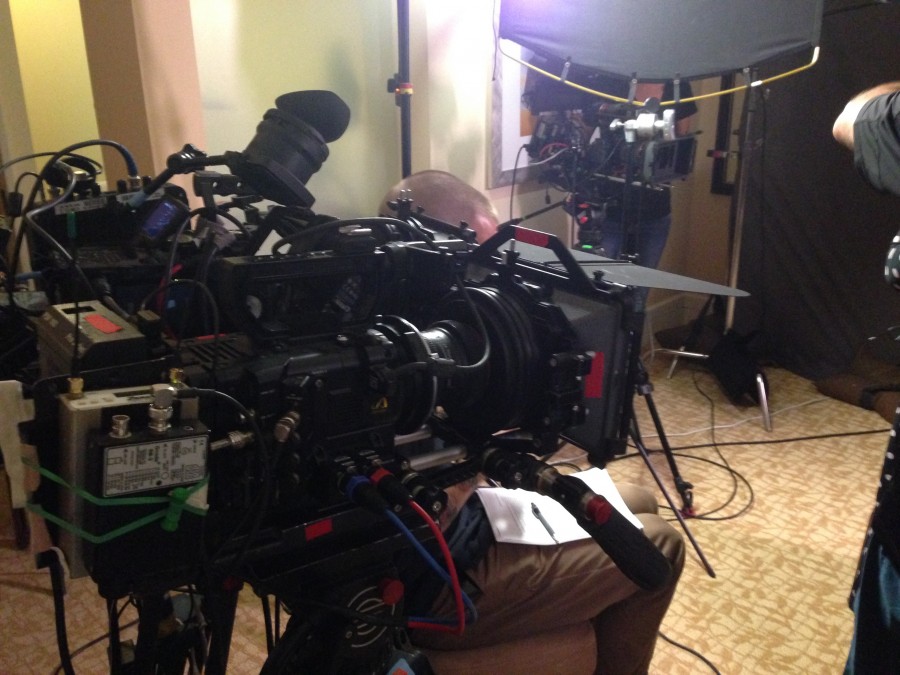 Our Sony F5 and FS700 side by side shooting different frame sizes and the Canon 5D in the background shooting profile. You can barely make out our interviewer seated beside the camera.

Finding enough space for lights at the right positions to  work for two camera angles, and enough space for the three operators as well as the sound man and four Nat Geo producers and marketing reps was not even the biggest challenge!  It was hanging a backdrop and wrapping it around two walls to cover both camera angles – and getting all the wrinkles out!

Running and Gunning on Broadway 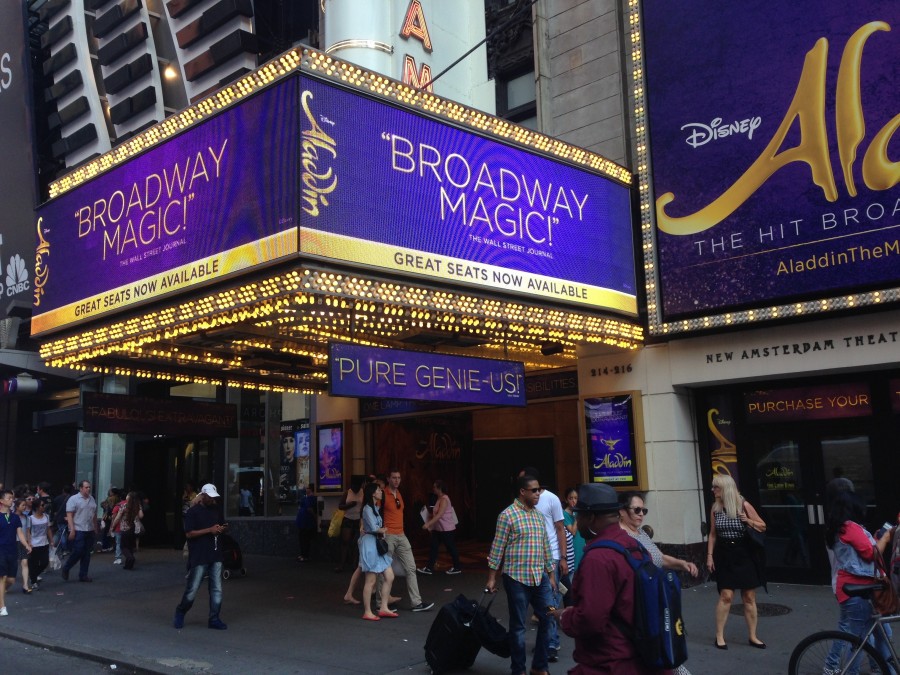 The next job afforded me the rare opportunity to shoot behind-the-scenes at the Broadway production of “Aladdin” in the historic New Amsterdam theatre.  This impressive location, built in 1903, was the home to much of Broadway history, including the Ziegfeld Follies, and encompasses seven floors of backstage spaces, passageways, changing rooms and stairways.

During the urgent activity of a live production this building sizzles with the activity of hundreds of cast and crew – all moving to precise spots on an exact timetable.  To capture this with a camera meant being as mobile as they. 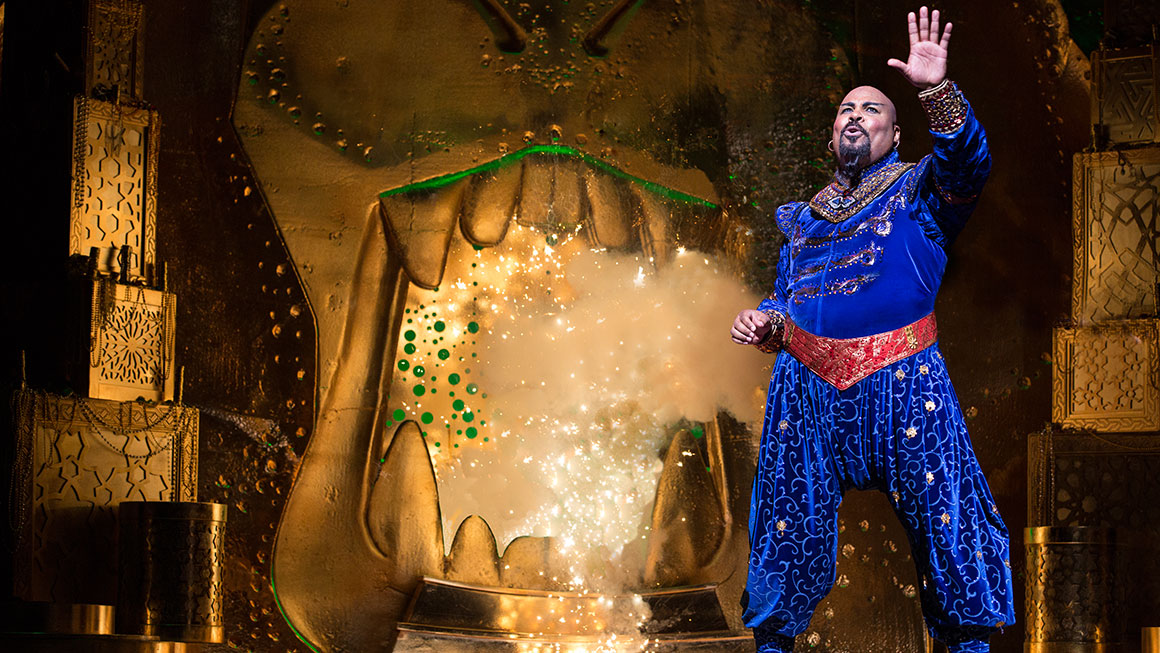 It would be a real race to follow the actor who plays the Genie, Major Attaway, backstage from dressing room to stage wings, up and down seven floors, throughout a live performance.  Handheld was the only answer, so I used a monopod with a Sony XDCAM EX1 and rode the exposure and gain.  Additional coverage of the costumers and dressers interacting with the cast was done during a rehearsal with the aid of 5 Go-Pros and two Sony FS700’s.

The project will be a special edition segment of ESPN’s “Sport Science” show that will reveal some of the unknown science behind the athleticism involved in performing prolonged singing and dancing routines.