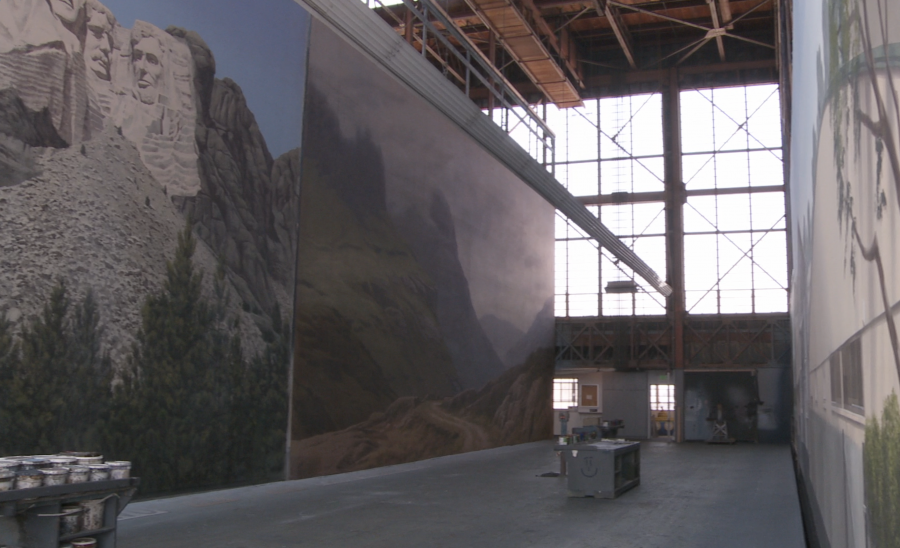 For nearly 80 years scenic backdrops were painted for movies in this studio on the MGM lot. In the left corner, a backdrop from “North By Northwest”

JC Backings, the owner and curator of thousands of scenic backdrops dating back to the 1930′s, when the scenic paint building was first constructed at MGM, is moving out of their home on the Sony lot.  The building where all of the backdrops were painted is being re-purposed.    The sentimental, artistic and historic value of many backdrops, painted for iconic film classics, can’t be denied. But – thanks to the advance of technology – backdrops are created digitally now, not hand painted as they were for decades, by highly skilled artists who could draw and paint their scenes to look like photo-real shots for the camera. (The story of these artists is published in the ultimate book on the subject “The Art Of the Hollywood Backdrop”) So many of these backdrops don’t have any commercial use.  They are old and worn, and the company couldn’t afford to keep them. 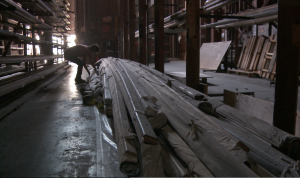 Hundreds of backdrops were pulled from warehouse racks where they had been stored for decades.

To keep them from going into the trash, one of the authors of the book, Karen Maness, teamed with JC Backings and  Tom Walsh, President of the Art Directors Guild to create the “Backdrop Recovery Project” to identify, catalog and photograph these artifacts of film history.  I was lucky enough to be part of this effort by documenting/shooting the labor intensive process performed by volunteer art directors and production designers.

The logistics of the process were inspiring to watch.  The 207 backdrops ranged in size from 6′x 10′ up to 30′x 100′.  Most were fastened to wood battens that were up to 40 feet long that took three men to carry.  Some paintings weighed hundreds of pounds and in total there were TONS of art. Hauling piles of these drops through the Sony lot to Stage 23 elicited amazed stares from studio veterans, and looks of wonder and interest from young artists curious about them.

Some of the backings were identified only by number in an old catalog.  As they were unrolled, hung and photographed, Tom and Karen researched film archives and were able to identify them on the spot –with amazing results! 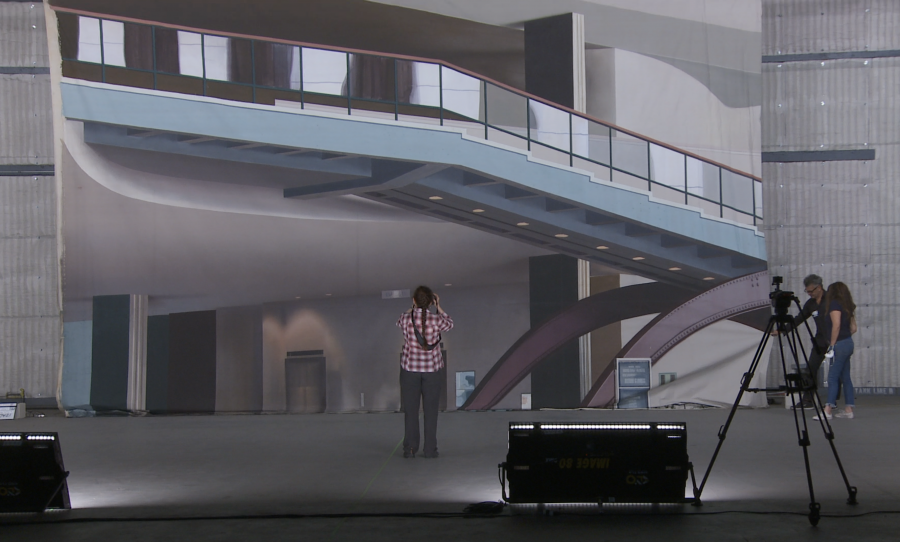 Half of the backing of the U.N. lobby from North By Northwest, being photographed by Melinda Sue Gordon.

Singin’ In the Rain 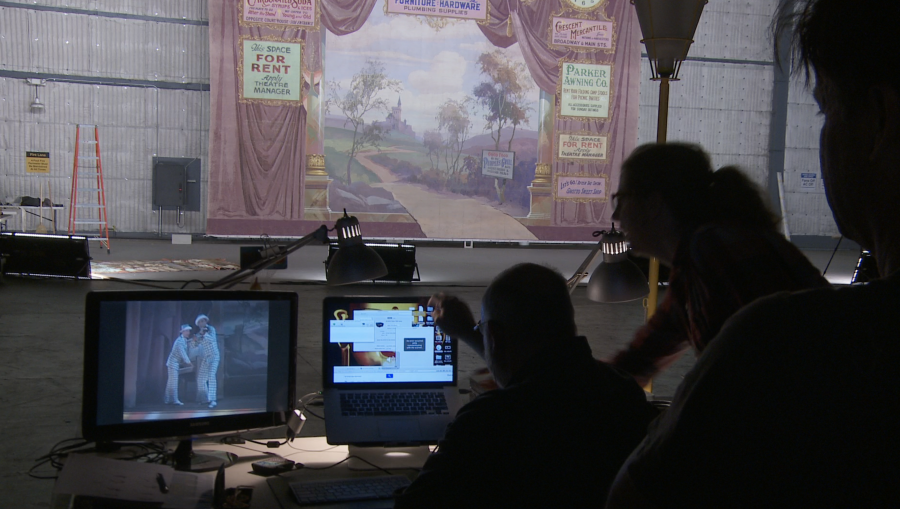 Tom Walsh and Karen Maness comparing the “Fit As A Fiddle” scene in “Singin In the Rain” to the original backdrop that was discovered. 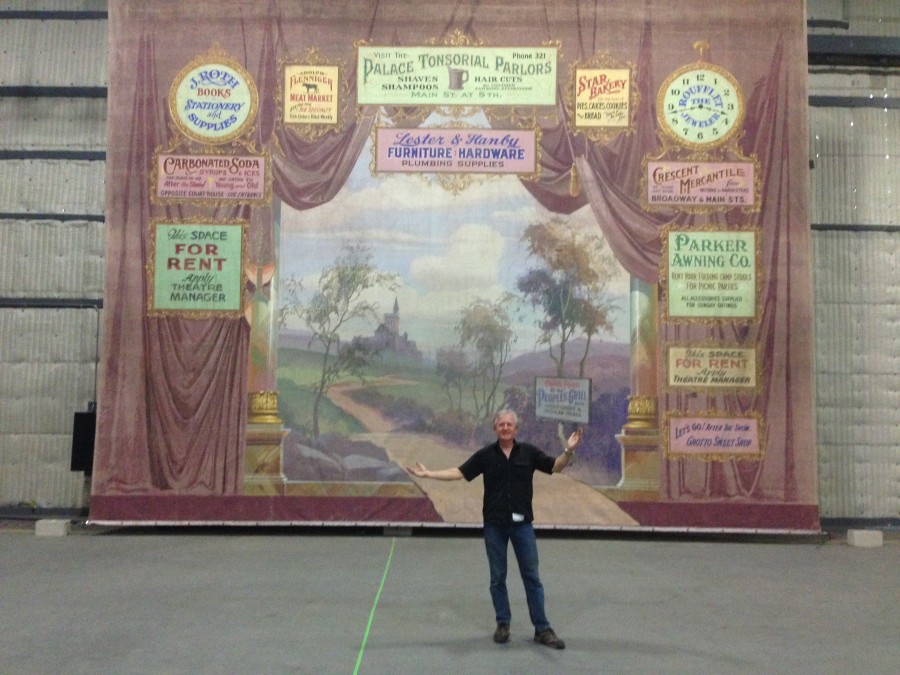 Me – following in Gene Kelly and Donald O’Connor’s footsteps. 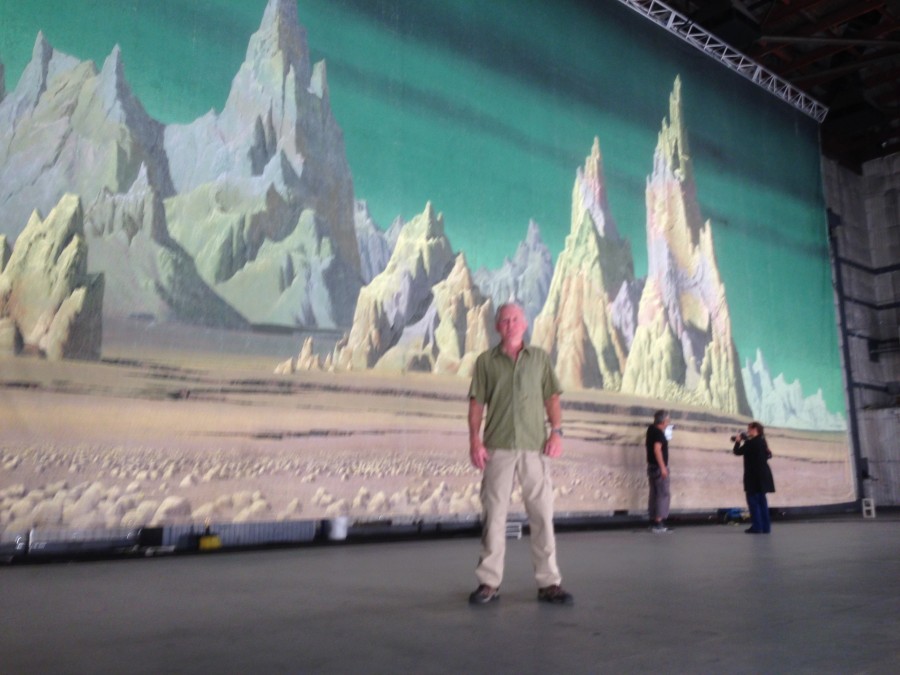 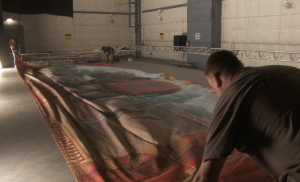 Nine days of hard work brought the project to a successful completion.  During it I had to put down the camera sometimes to help hang 60-foot canvases.  I also found out how to correctly fold huge sheets like that. If you think its a challenge to fold 60 foot long sheets, you should try folding a 100-footer in to a neat bundle.

All the HD footage will sometime soon be fashioned into a documentary that tells the story of the creation of these magnificent works of film art by many of the artists, the films that they were created for, and what ultimately will happen to them.  All 207 backings were photographed in great detail by Melinda Sue Gordon for the Art Directors Guild, the Motion Picture Academy Archive…and for posterity.

Art that looks so real, you feel like walking into it… 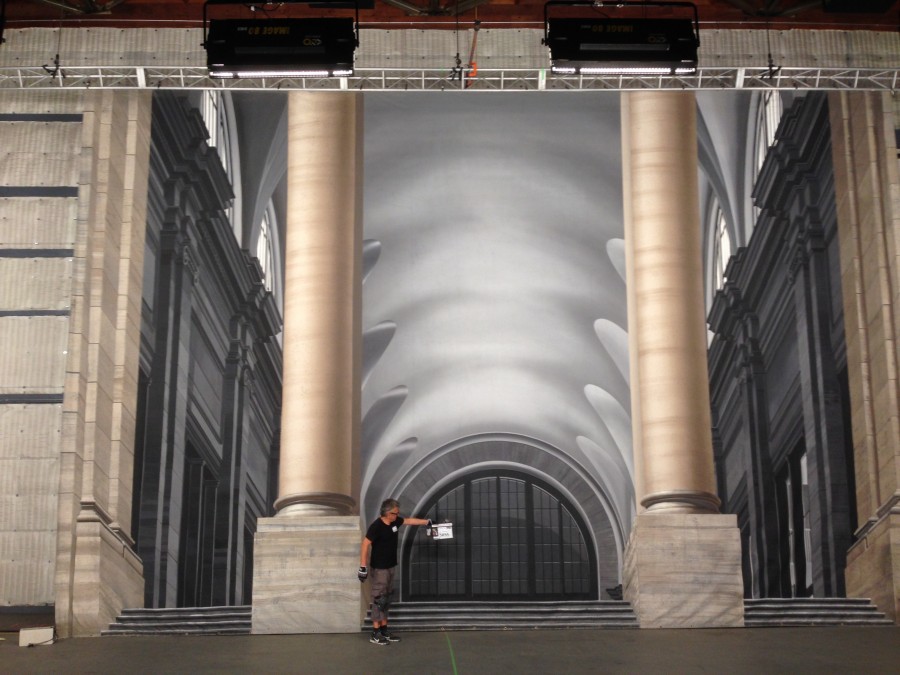 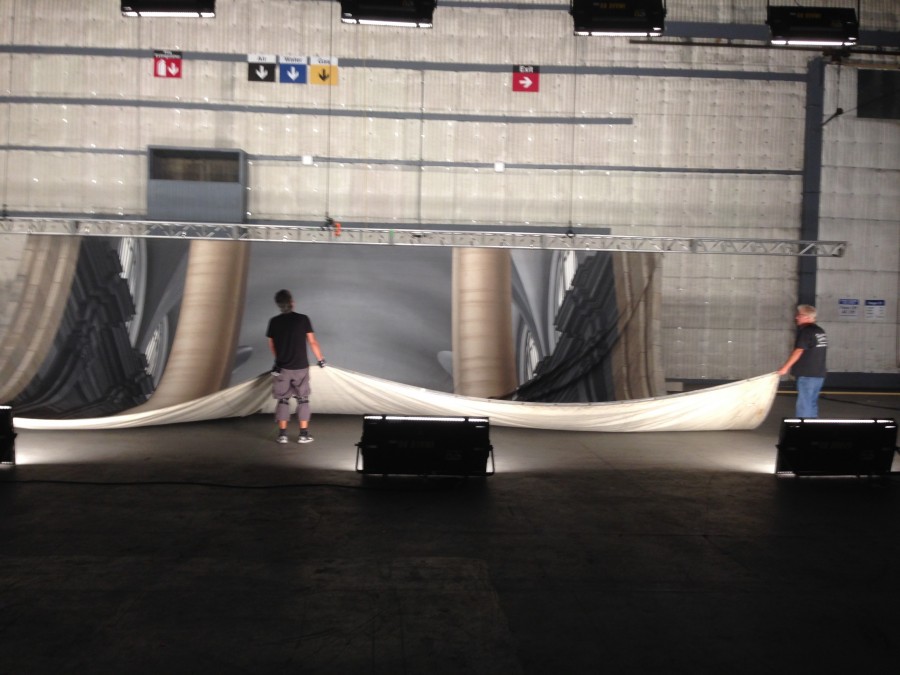 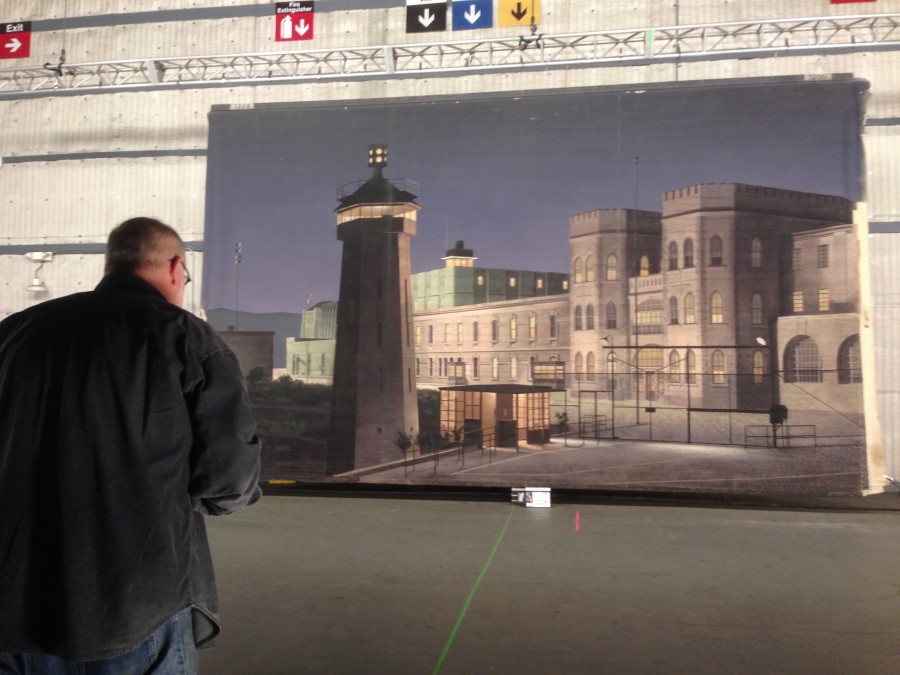 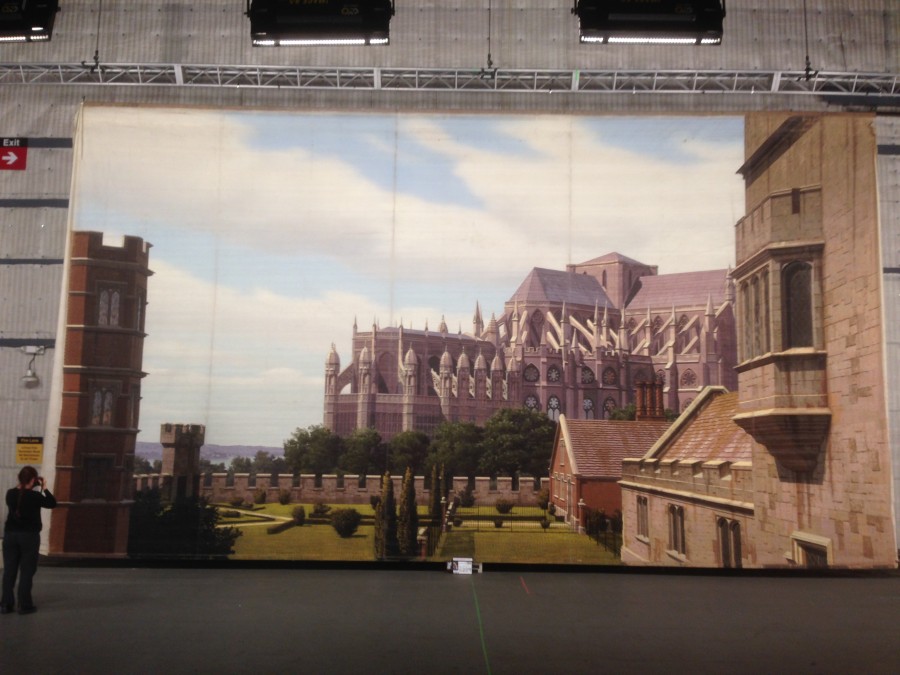